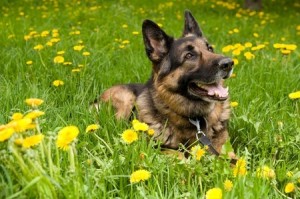 In a few days, we in the United States will be treated to a rare celestial event—the Great American Eclipse. It is so-named because it is the first total solar eclipse visible only in the U.S. since the country was founded in 1776. Because of the different orbits of the sun, moon and earth, total eclipses are visible only in certain locations of the world at any given time. In fact, it takes about 1000 years for every location in the contiguous United States to be able to view a total eclipse.

For those of us in Northern Colorado, the eclipse on August 21 will not be total. However, it will still be an event worth viewing, if you are so inclined. And you’re probably aware that you need to wear special viewing glasses to do so safely. But what about your furry friends? Do you need to take precautions for them as well?

Are Your Pets Safe?

A dog or cat eye is fundamentally the same as a human eye. Therefore, your pets’ eyes are subject to the same type of damage that unprotected viewing of the eclipse can cause to your eyes. The sun’s rays can burn the retina causing vision impairment. Should you be concerned for your pets? Well, yes, but not really.

Yes, if a dog, cat or any animal, stares at the sun, damage can occur. But because of the sun’s brightness, we, and our animals, find it difficult if not impossible to stare at the sun long enough for damage to occur. However, during an eclipse, the moon blocks enough of the sun’s rays that it’s possible to stare at the sun and damage your eyes. Will your dog or cat look at the sun long enough to cause damage? Highly unlikely. Have you ever seen your dog or cat or any animal staring at the sun? Probably not, and it most likely won’t happen during the eclipse either.

If you are still worried, you can obtain a pair of eclipse-viewing glasses and attempt to get Fido or FiFi to wear them during the height of the eclipse. Hint: It might take time to get your furry friend to wear them, so don’t introduce them on the day of the eclipse. Or you can simply keep them indoors and away from doors or windows.

Animal Behavior During an Eclipse

Unless you have a furry friend who takes an avid interest in what’s happening in the skies above, there’s little to worry about. That’s not to say that there won’t be anything interesting to observe with our animals during the eclipse. It will basically be similar to having dusk in the middle of the day. The unexpected darkness might cause some anxiety, dogs that prefer to come inside at night may bark to come in, and cats that are used to prowling at night might head out early. In addition, cattle might head home to their evening quarters, chickens may retire to their roost, birds may nest and crickets might start to chirp.

So on Monday, don’t worry about the safety of your pets. Instead, focus on the rare and amazing phenomenon occurring in the skies above. It will be a very long time before such an opportunity comes again.